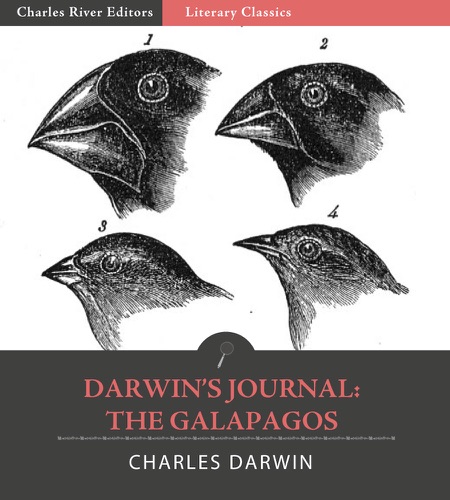 Charles Robert Darwin (12 February 1809 – 19 April 1882) was an English naturalist. He established that all species of life have descended over time from a common ancestry, and proposed the scientific theory that this branching pattern of evolution resulted from a process that he called natural selection.He published his theory with compelling evidence for evolution in his 1859 book On the Origin of Species, overcoming scientific rejection of earlier concepts of transmutation of species.
Darwin’s Journal and Remarks, was written during the expedition of the ship HMS Beagle, which set sail from Plymouth Sound on 27 December 1831.  Darwin’s Journal contains a vivid description of the creatures, geology, and geography he encountered.  The Galapagos, the archipelago of islands off the coast of Ecuador, are now synonymous with Darwin..  Darwin discovered that the mockingbird species varied from each island in the Galapagos, which served as the catalyst for his theory on natural selection, published 28 years later.