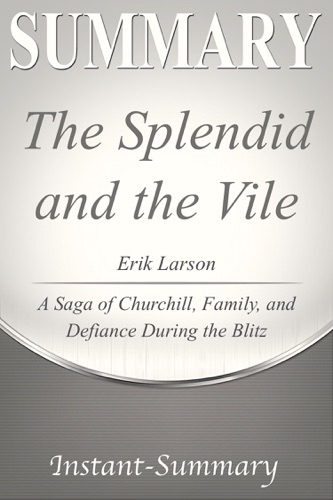 The Splendid and the Vile: A Saga of Churchill, Family, and Defiance During the Blitz - A Comprehensive Summary

Erik Larson’s The Splendid and the Vile is a vivid account of the British experience of World War II from 1940 to 1941. It is filled with insight into the life of Winston Churchill, who led the British during a time of war and heartbreak. Adolf Hitler had broken France and turned his attention to the island nation, and Churchill was tasked with leading the nation and preserving the last free outpost of Hitler’s Europe.
The tome is a detailed foray into the outstanding British leadership that prevailed against terrible odds, with over 500 pages of historical fact, dates, battles, heroics, diary entries, and international relations between allies and enemies. It covers events from the first week of May 1940 to the New Year’s Eve of 1941, but there is enough material for years of reading—and decades of inspiration.
Larson divides his tale into seven major parts, covering between one and four months each in successive periods. It begins with Winston Churchill’s acceptance of the position of Prime Minister of Britain in May 1940. Around this time, Hitler’s nefarious activities were climaxing in Holland, Belgium, and Luxembourg. Neville Chamberlain was ousted by popular outcry at a crucial point in the war, and Churchill was promptly summoned to fill in the post.
Winston Churchill was only the second choice—the position was initially declined by King George’s man, Edward Frederick Lindley Wood, First Earl of Halifax (known affectionately as Lord Halifax). It was awkward timing and would have been a phenomenally unwise career move for anyone offered the same job at that point. A calling to the helm of a flailing nation seemed doomed to failure, but the dynamic Churchill took on the position with gusto, even in his mid-sixties at the height of the worst war in history.
Larson has drawn on myriad public records, not only official government sources, like telegrams, memos, and wartime records, but also more personal iterations that were echoed at the grassroots. These edifying glimpses into British culture include numerous references to diary entries, for example, from Mary, Churchill’s daughter, John Colville, a well-known private secretary at 10 Downing Street at the time, and a few prominent Mass-Observation contributors who jotted down their thoughts and fears for the organization during the war.
Great leaders are never born that way. They create themselves through hard work and determination, a lifelong process of learning, self-assessment, and struggle. Through this toil, truly effective leaders build up the inner strength and self-possession that allow them to inspire and motivate others to do greater things, mirroring through other people the way they maximize their own potential.
Winston Churchill is one of the most fascinating figures of the recent past, for a wide variety of reasons. One of the most compelling of these is how his life so definitively embodies this process of becoming a great leader. Churchill fought to make the most of himself and of others around him almost from the start, and the times and setting he lived in gave him no shortage of challenges to test himself against.
This short book aims at helping those interested in the subject of leadership appreciate a few of the many lessons that Churchill’s life has to offer. It begins with a brief overview of the great man's life story, ranging from the aristocratic, but often challenging, circumstances of his birth and early life to the height of his power and his subsequent decline. It then moves onto ten especially significant lessons in leadership from that famous life, each springing from the circumstances of a particular stage of his development and his responses to them. While each of these distinct episodes has a particular point to teach to students of leadership, they also help to reveal and illuminate more fundamental principles that are just as valuable.
Churchill's life has far more to teach than could possibly be covered in a short work like this, so what follows should not be taken as anything more than a taste of what is available. Even a relatively quick and casual survey of what the man's life and experiences can offer should be valuable, though, to those interested in becoming stronger, more effective leaders themselves.
Here is a Preview of what you will get:
- A Detailed Summary of the book
- An Analysis of the book to help you better understand it.
- A quiz and answer

Grab a copy of this book now!