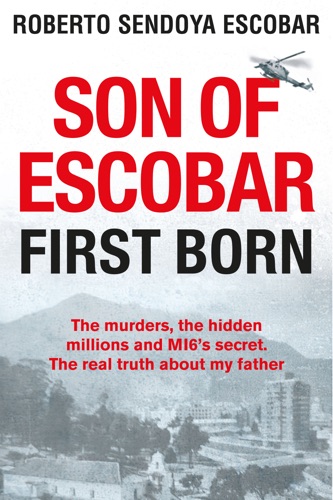 Pablo Escobar was the most notorious drug lord the world has ever seen. He became one of the ten richest men on the planet and controlled 80 per cent of the global cocaine trade before he was shot dead in 1993.

This is the long-awaited autobiography of his eldest son, Roberto Sendoya Escobar.

His story opens with two helicopter gunships, filled with heavily armed Colombian Special forces personnel led by an MI6 agent, flying into a small village on the outskirts of Bogota in Colombia. The secret mission to recover a stolen cash hoard, culminates in a bloody shoot-out with a group of young Pablo Escobar's violent gangsters. Several of the men escape, including the young Escobar.

As the dust settles in the house, only a little baby is left alive. His distressing cries can be heard as his young mother lies dead beside him. That baby is the author, Roberto Sendoya Escobar. In a bizarre twist of fate, the top MI6 agent who led the mission, takes pity on the child and, eventually, ends up adopting him.

Over the years, during his rise to prominence as the most powerful drug lord the world has ever known, Pablo Escobar tries, repeatedly, to kidnap his son. Flanked by his trusty bodyguards, the child, unaware of his true identity, is allowed regular meetings with Escobar and it becomes apparent that the British government is working covertly with the gangster in an attempt to control the money laundering and drug trades.

Life becomes so dangerous, however, that the author is packed off from the family mansion in Bogota to an English public school. Many years later in England, as Roberto's adopted father lies dying in hospital, he hands his son a coded piece of paper which, he says, reveals the secret hiding place of the 'Escobar Missing millions' the world has been searching for!

The code is published in this book for the first time.